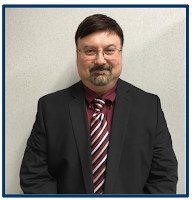 After 20 years in the private sector, James began his educational career in 2002 at Statesville High School in Iredell County as a special education teacher. Next, he taught business technology at Lake Norman High School, implementing the county’s first Cisco Network Engineering Academy.

James began his career in school administration as an assistant principal, high school summer school principal, and then interim principal at South Iredell High School before tasked with the challenge of turning around one of the district’s lowest performing middle schools.

As principal at Troutman Middle School, where most of the students were economically disadvantaged, James led the school to high growth, met measurable objectives and was named a school of distinction multiple times. The school had the highest composite growth of all middle schools in the Iredell system for 2009-2011. During his tenure, Troutman Middle was recognized by the N.C. Department of Public Instruction as one of the “Top 25 Most Improved Schools.

Since 2013, James has served as assistant superintendent for Montgomery County Schools (MCS). There his duties related to learning, federal programs and pre-K.