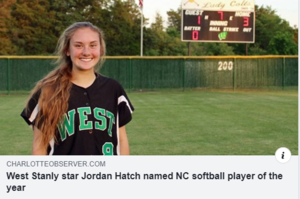 WSHS softball pitcher, Jordan Hatch, receives state honor.
CHICAGO (May 30, 2019) — In its 34th year of honoring the nation’s best high school athletes, The Gatorade Company today announced Jordan Hatch of West Stanly High School as its 2018-19 Gatorade North Carolina Softball Player of the Year. Hatch is the first Gatorade North Carolina Softball Player of the Year to be chosen from West Stanly High School.
The award, which recognizes not only outstanding athletic excellence, but also high standards of academic achievement and exemplary character demonstrated on and off the field, distinguishes Hatch as North Carolina’s best high school softball player. Now a finalist for the prestigious Gatorade National Softball Player of the Year award to be announced in June, Hatch joins an elite alumni association of past state softball award-winners, including Catherine Osterman (2000-01, Cy Spring High School, Texas), Kelsey Stewart (2009-10, Arkansas City High School, Kan.), Carley Hoover (2012-13 D.W. Daniel High School, S.C.), Jenna Lilley (2012-13, Hoover High School, Ohio), Morgan Zerkle (2012-13 Cabell Midland High School, W. Va.), and Rachel Garcia (2014-15, Highland High School, Calif.).
The 5-foot-5 sophomore left-handed pitcher has led the Colts to a 26-1 record and a berth in the Class 2A state finals at the time of her selection. Hatch compiled a 26-1 record with a 0.53 ERA, striking out 348 batters in 170.2 innings pitched, while allowing just 63 hits and 33 walks. An All-State honoree, she was also the Rocky River Conference Pitcher of the Year. Hatch has volunteered locally on behalf of the Special Olympics, the Salvation Army and youth softball clinics. “I’ve never seen a pitcher of
Jordan Hatch’s caliber at the high school level,” said Brittany Baucom, head coach at Mt. Pleasant High. “Her composure is more that of a college veteran. The rise ball is her best pitch, but as a sophomore she’s really come into her skill set and uses her whole arsenal of pitches. She’s just a great ballplayer and a great teammate.” Hatch has maintained a 4.0 GPA in the classroom. She will begin her junior year of high school this fall.
The Gatorade Player of the Year program annually recognizes one winner in the District of Columbia and each of the 50 states that sanction high school football, girls volleyball, boys and girls cross country, boys and girls basketball, boys and girls soccer, baseball, softball, and boys and girls track & field, and awards one National Player of the Year in each sport. From the 12 national winners, one male and one female athlete are each named Gatorade High School Athlete of the Year. In all, 607 athletes are honored each year.
Hatch joins recent Gatorade North Carolina Softball Players of the Year Abby Settlemyre (2017-18, Fred T. Foard High School), Mia Davidson (2016-17 & 2015-16, Orange High School), Mary Williams (2014-15, Cape Fear High School) and Vada Sherrill (2013-14, Alexander Central High School) among the state’s list of former award winners.
As a part of Gatorade’s cause marketing platform “Play it Forward,” Hatch also has the opportunity to award a $1,000 grant to a local or national youth sports organization of her choosing. She is also eligible to submit an essay to win one of twelve $10,000 spotlight grants for the organization of choice, which will be announced throughout the year. Since the program’s inception in 1985, Gatorade Player of the Year award recipients have won hundreds of professional and college championships, and many have also turned into pillars in their communities, becoming coaches, business owners and educators.
To learn more about the Gatorade Player of the Year program, check out past winners or to nominate student-athletes, visit www.Gatorade.com/POY on Facebook at www.facebook.com/GatoradePOY or follow us on Twitter at www.twitter.com/Gatorade.
https://playeroftheyear.gatorade.com/winner/jordan-hatch/37256
Print